My journey into cycling came through triathlon, like almost everyone else it seems! I was a super active kid and did swimming carnivals and lots of running as well as riding my bike to school every day, so doing a sport involving all those three at once was a natural next step for me. Doing triathlon was also a great way of getting a day off school!

I always really enjoyed the cycling leg of triathlon, so I joined the Sydney University Velo Club when I started my degree at Sydney Uni, which is how my cycling story really began. I’ve been a member of Suvelo for around seven years now and they have been so good to me during that time, providing me with lots of support to help my development into racing. I now ride with the Sydney Uni-Staminade Women’s Cycling Team so it’s great to still be a part of the Club after all these years.

I love the open road and the ability to go fast with cycling, but what really drew me into it above all was the community. It’s a very social sport and I loved being able to ride as part of a group of people who are all likeminded and inspiring. I remember when I first got into the Sydney Uni Club and I just thought it was so cool to be surrounded by so many successful and high-achieving people- that’s really what I love most about it.

What I love of course too is racing! I’m quite a competitive person and so it was very fun to go to my first race and do well and win money. There’s so much racing in Sydney as well; in summer there are races almost every night of the week, so it really was a great place to develop my riding.

Racing the Tour Down Under has been an absolute highlight. I’ve done it five times with my team, and it is amazing to partake in such an iconic race alongside the world-class professionals. It is quite surreal to look up to these girls your whole career and suddenly find you’re racing against them, and obviously there is a huge jump at that World Tour level, but you realise by doing it that it is achievable, especially if you put the time into it.

Other highlights have been when I have raced overseas, especially the Tour de Timor which I have raced five times and won in 2018! It was a multi-day, multi-stage mountain biking race that really suited road cyclists, and was a super cool, out-of-the-ordinary event in an out-of-the-ordinary country, Timor Leste. I have just loved being able to travel with my bike and race with it overseas!

There’s definitely more equality for women in cycling now than when I started in terms of prize money on offer, which is a really good thing. However, to achieve gender parity
what really needs to change is the level of female participation in the sport. Currently there is a huge participation gap between men and women, with I’d say around 90% of riders being men. That makes it difficult for the sport to field women only events, which then means women have to compete with the boys. This can be quite intimidating for women and ultimately discourages more women from getting into racing.

Money also remains a significant issue for women’s cycling, despite recent improvements.
Professional women’s pelotons are at least offered minimum wage in 2020 but it’s still hardly any money, barely enough to make a living on and requiring a huge amount of sacrifice which many women cannot afford to make.

It’s sad because sport is so great women in the way it provides opportunity, community as well as empowerment. Cycling is a huge part of my identity, and without it I’d have a big hole in my life.

How Premax Helps Me Perform

I first heard about Premax in 2013 when a friend told me she had in her possession the best sunscreen ever. I gave it a try and I found out that it indeed was the world’s best sunscreen, and I have used Premax’s Sports Sunscreen almost exclusively ever since. I haven’t found a product that is better for sport. I don’t go outside without putting it on, so it’s a huge part of my daily cycling routine.

Premax’s Chamois Cream for Women is also a riding essential- I have had way too many cafe convos with friends about saddle sores, so I’m painfully aware of how important it is to avoid those. I really like the Weather Defence Facial cream as a great post-ride product, and I get myself treated with Premax’s Massage Cream as a special once a month treat. 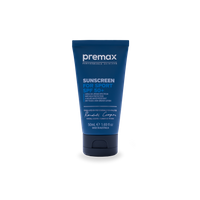 Wobbly Knees and Knee Pain | 15.07.19
You may have noticed whilst watching the pros on t... Read More
How Premax Can Improve Sporting Performance | 04.07.19
For those motivated sports people who are looking ... Read More
Saddle Height and Knee Injuries | 27.03.15
Cycling and knee injuries go hand in hand. Pain in... Read More