Randall Cooper
This ‘virus’ has upended most of what we do. It’s hard to think of any aspect in life that hasn’t substantially changed, and for those of us who enjoy riding a bike we can still do it, however it’s a different experience. Weekend bunch rides are out, as are the much-loved café stops along the way, and with no events or races on the calendar riding is for the moment – just for the love of it.

It’s no different for professional riders, and they’re quickly adapting to a new normal both physically and mentally. Here’s a few insights from the pros on what they’re doing at the moment;

Work on Your Weaknesses

Gracie Elvin is a two-time Australian National Road Champion and Classics Leader for Mitchelton Scott, and she’s using this downtime as an opportunity to tweak her training volume and work on her physical weaknesses.

“I was in peak condition for the spring classics when the racing was cancelled so it was a good time to pull the training down a notch and just get some endurance rides in to maintain fitness” says Gracie. “I also started to do weight training again (I’m lucky to have a small home gym!) because it’s a good time to work on some weaknesses off the bike again. We aren’t sure when the next race will be so it’s important to find the balance of a sustainable training load, work on weaknesses, but also not put too much pressure on yourself.”

There’s plenty of scientific evidence that strength training improves endurance cycling performance, so it’s actually a great time to dust off those weights and powerbands and work on a program that works for you.

The Trainer is Different to Riding Outside

There are a number of differences when training on a trainer indoors compared with training outside, something that Jack Haig from Mitchelton Scott is having to adapt to quickly. Jack lives in Andorra and has been stuck inside for weeks.

“I haven't been able to train outside for over three weeks now, which is quite difficult considering I am used to 25hr+ a week training outside” says Jack. “I have been forced to do all of my training inside on Zwift, and I’m doing a minimum of 1hr every day - sometimes double days with a ride in the morning and another in the afternoon”.

Time on the trainer is different to time on the bike outside. “I can only handle about 2hr maximum at a time inside compared to outside where it’s quite easier to do 4-6hrs riding in the mountains of Andorra” explains Jack.

Gracie Elvin also adapts her training intensity and also accounts for the lack of cooling breeze on the trainer. “I often take off 10-15% of my power because it’s just harder to push the same watts on the trainer than it is outside” says Gracie. “You also have to factor in the heat - you aren’t getting the breeze like on the road so it’s important to be mindful of the extra stress you are putting on your body”.

The lack of freewheeling on the trainer also leads to a more concentrated effort. The rough rule of thumb is that 1 hour on the trainer equals 2-3 hours on the road.

Try and Keep it Social

Cycling for many is a social thing, and it’s no different for the professional riders. Jack Haig suggests using digital technology to stay connected with other riders. “I think it’s important to keep it fun and enjoyable. I find using Zwift events and group rides help with this” says Jack.

Gracie Elvin says she’s doing the same, “it’s great to be able to use platforms like Zwift to keep things entertaining and social, like some of the team rides and races we have done so far”.

Chamois Cream will Save Your Backside

Riding on the trainer indoors can lead to an increased incidence of saddle sore related issues unless you take precautionary measures. Gracie Elvin explains “I’m one of many riders who uses chamois cream regularly. If I ride for any more than 1hr outside I use it, and always use it for indoor sessions. The higher sweat rate irritates my skin so using Premax Chamois Cream for Women really helps me avoid these problems so I can train day after day”.

Jack Haig also says he relies more on chamois cream when training indoors. “Being inside training so much on the turbo I find it quite beneficial to use chamois cream for a little extra comfort and to have the ability to back up day after day, the lack of movement and also the build-up of salt and sweat makes it different to riding outside” says Jack.

Gracie has one last piece of advice on looking after yourself and your bike when training more indoors. “Clean your bike after each session so your sweat doesn’t rust and ruin it, and take a shower straight away so you’re not spending extra time in that sweaty kit!”. 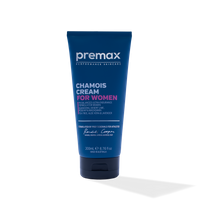