Randall Cooper
Tim Ford’s journey of self-transformation has been nothing short of remarkable. Before the life he leads now as a fulltime athlete and coach, Tim lived an unimaginably different existence. Heavily overweight and lacking direction, Tim was resigned to living to a life he saw no way out- until he tried a triathlon. Ten years and a whole lot of triathlons later, Tim is 50 kgs lighter, in the best shape of his life, and gets to call his passion his job. Read below to get the full account of Chris’ remarkable story.

Tim’s story is testament to the life-changing power of sport, and more specifically, triathlon - the sport he fell in love with.

He had made some unsuccessful attempts at losing weight but couldn’t get out of his bad shape. Tim hit the alcohol hard on weekends, had high blood pressure and high cholesterol, and weighed 245 pounds.

It would be untrue to say that he was completely miserable, but his life was certainly only a fraction as fulfilling as it is now. And he couldn’t see any real way out of it.

But on his 24th birthday in 2010, Tim’s friend entered them both into a triathlon as his ‘gift’. At first, he thought it was crazy. He wasn’t even remotely interested in triathlon, and he couldn’t understand why people would pay to do it.

However, Tim eventually came around to the idea, on the basis of ‘why not?’. It didn’t really occur to him that it was something he wouldn’t be able to do. So, completely underestimating the severity of the challenge he was undertaking, Tim said yes. What was the worst that could happen?

Tim wasn’t to know it, but that decision would go on to change his life.

The First Triathlon was the Hardest

Tim’s first encounter with triathlon was the absolute opposite of a love at first sight moment.

He had totally underestimated what he was in for- that first race was so much harder than he had ever imagined it would be. He was hours behind the rest of the competition, and every stage of that event was its own struggle, where he was fighting simply to finish.

Tim’s friend stayed with him the whole time, encouraging and supporting him to keep going.

At the end of the swimming leg, a photo was taken of Tim emerging from the water, that has now become emblematic of his transformation.

Tim even turned to his friend during the run leg, in the midst of his suffering, and declared: ‘With God as my witness, I will never do this again. This is a disaster.”

The only aspect of the race Tim remotely enjoyed was the bike leg of triathlon, which his big body had the least issue with compared to the run and swim which he found hard and painful.

In the end, it took Tim 4 hours and five minutes to complete that first triathlon, which is now around the same time it takes him to do a 70.3 mile half ironman.

Finishing that first triathlon flicked the competitive switch in Tim which is now a part of who he is. Although he was proud that he finished his first race, he knew, deep down, that he could have done better.

A year later, Tim decided he wanted to have another crack at a triathlon - and this time he wanted to do it properly. He still wasn’t doing it out of love for the sport, but rather out of stubbornness and the determination to prove a point.

So, forgetting what he had declared to his mate in that first triathlon, Tim went about preparing for his second ever triathlon.

This time, he trained hard for it, and really focused on putting himself in a position where he could improve on his last effort. He ran a lot, practiced at swimming and accumulated kilometres on the tarmac with his bike.

And the results followed. Tim shaved one hour and twenty minutes off his first time and 30kgs off his waistline.

Suddenly, he had gotten his first real taste of what he could achieve when he worked hard for it.

So, in 2012 Tim tried his hand at his first half ironman to further challenge himself, and despite being incredibly intimidated coming into it he ended up really quite enjoying it. It was a huge event with so many spectators creating an electric atmosphere - that’s when he started to fall in love with triathlon.

Soon after, Tim entered another half ironman with the friend who first got him into triathlon. Wanting to show him how far he’d come, Tim was going to try and beat him.

From that point on Tim was hooked. He loved seeing how much he could improve and quickly found his place in the triathlon community, which provided a social side to the sport.

That’s how triathlon became a large part of his life - by going from training to routine to lifestyle.

Where I Am Now

Fast forward ten years to 2020, and Tim’s life is unrecognisable compared to what it was.

Tim is the fittest and healthiest he has ever been.

He has lost 50 kilos, raced a total of 31 70.3 half ironman races and around 100 triathlons, and represented Australia in the Racing World Championships in 2016. Tim is now also a professional triathlon coach and the CEO of MX Endurance, an endurance sports training company. And what’s more, triathlon takes Tim to destinations all around the world; last year alone he raced in the US, Canada, Bahrain, NZ, Singapore and in Europe.

If you told Tim a decade ago this is what he would be doing now, he just simply wouldn’t believe you.

Now, Tim’s main goal is to register a 4h5m race time for the 70.3 half ironman, which is the time it took him to complete his first triathlon, all those years ago.

Above all however, Tim wants to help others achieve beyond their wildest dreams like he did. Tim feels like he has an obligation to give back to triathlon for all that it has given him –it has changed his life and saved it in a lot of ways. All he wants to do now is make the sport better.

Tim first heard of Premax through a physiotherapist who told him how good Premax’s creams were. Having gone through many chamois creams hoping to find the one that would cure his issue with saddle sores, Tim was keen to try Premax’s products.

Tim’s staples are the Chamois Cream and Sports Sunscreen. Using Premax’s Chamois Cream, Tim found that he no longer experienced issues with saddle sores, leading him to quickly realise how good the products are. He also finds the sunscreen fantastic, because it isn’t greasy and oily like the other sunscreens which he usually hates wearing.

To quote Tim’s view on Premax; “at the end of the day, they are great products made by a great guy in Randall who is truly passionate about supporting athletes, which is why I’m very happy to recommend Premax to others.” 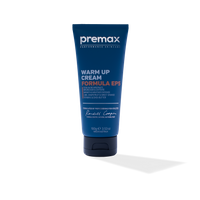