Randall Cooper
Winter is approaching, and with the change in weather comes an increase in people experiencing joint pain, especially on cold days. Early in my career I have to admit I brushed it off with my patients, thinking it must be largely psychosomatic stemming from old wives tales about how Grandma’s “knees ached when it was cold”. With more time and experience I realised there were far too many people who suffered sore joints on cold days for it to be between the ears, but I never had a good explanation for why it occurred. Recent research however has shed some light why environmental cold exposure increases pain in degenerative joints.

There have been various theories on why degenerative joints become painful in colder weather. One theory focuses on barometric (atmospheric) pressure, which usually drops in cooler temperatures. The thought has been that a reduction in barometric pressure can cause tissues in joints to swell and place pressure on sensory nerves. Although joint pain can be experienced at extremes of altitude, presumably because of extremes in barometric pressure – at the top of the Himalayas or deep sea diving, relatively minor fluctuations in pressure around sea level probably won’t make a difference to joints.

Another theory revolves around a reduction in activity levels over winter. People tend to stay inside and move less during the cooler months, and we know that low muscle strength and low activity generally increases pain experienced from arthritic joints. Shorter days and less sunlight can also lower people’s mood, and low mood has been linked to an increase in perceived pain levels. However in my experience, joint pain which is related to weather tends to be sudden. A cold autumn morning after a long hot summer is often the trigger. If low activity and low mood were solely responsible you would expect a slow deterioration over weeks or months as we descended into winter rather than a rapid onset of symptoms during a sudden burst of cold weather.

A recent study (1) however has unveiled the most likely reason degenerative joints become painful in the cold. Researchers from Kings College London did a study on mice where they injected one knee with complete Freund’s adjuvant (CFA) and the other with saline, essentially creating one knee with inflammatory arthritis, and one without. There were two group of mice, one group of “normal” mice and another group lacking TRPA1 (TRPA1 is a protein/ion channel that is a sensor of pain, cold, and itch).

Two weeks after injection they measured pain response and blood flow in the mice. Prior to measurements the mice were maintained at either room temperature (22–23 °C) or exposed to cold (10 °C) for 1 hour. Pain sensitivity was increased in the mice with CFA-induced arthritis when exposed to the cold for 1 hour, compared with those held at room temperature. Pain sensitivity was also TRPA1 dependent i.e. this protein seems to be one that is responsible for this cold-induced pain sensitivity.

Blood flow was also increased in the CFA-treated joint when exposed to the cold. This also appeared to be TRPA1 dependent. It’s an interesting discussion as to whether this increase in blood flow to an arthritic joint in the cold is good or bad, however there is an established link between new blood vessels and new sensory nerve growth (pain) in arthritic joints.

Although this is a study on mice, it’s interesting and clinically applicable. It’s the first study to provide evidence that cold exposure alters pain sensitivity and blood flow in arthritic joints – something that is good to know for both health professionals and people experiencing sore, degenerative joints. New medications that manipulate the TRPA1 channel may be of significant benefit.

Although joints may become more painful in the cold, it’s still important to keep your weight down, and your strength and condition high for long term health. Keep moving!

Pre Event Massage of the Calf

Preparing athletes for exercise and sport has changed in recent years, and those changes include the way health practitioners use soft tissue therapy. The term activation is now being used more than warming up, and in this video I’ll demonstrate how I apply massage to the calf muscles to get triat...

Anyone who plays a change of direction sport like basketball, football, netball, or skiing knows how an ACL injury can ruin a sporting year or career. An ACL injury usually results in a surgical ACL reconstruction and 9-12 months of rehabilitation. In recent years medical and sports practitioners ha...

With Christmas fast approaching, I thought I would use the blog to say thank you to everyone for a fantastic 2014 for Premax. To all our customers, distributors, retail outlets, sponsored athletes and teams, and staff – thank you very much. Whilst is been a great year for us, 2015 is shaping up to... 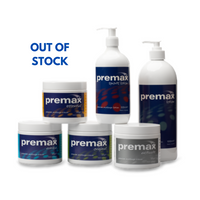 Health professionals will get excellent value from our Professional’s Massage Pack. There's four large massage creams, our massage lotion, and sports lotion. Premax massage creams and lotions have been developed to work as a synergistic group of products. Each product has it's own texture, combination of ingredients, and clinical application. You will save 10% when purchasing these products in this pack compared to buying them separately.

If you enjoy keeping active outdoors, then our Weather Protection Skincare Pack is your one-stop sol...

Women have different skincare needs to men. We understand. Our Women’s Cycling Pack will help keep...

A long lasting, multi-purpose, and high-performance formula used by the world’s best athletes. It ...

An exercise-specific, breathable and long lasting facial cream, which protects the skin in windy, co...

We understand that triathletes like to focus on their training and performance, and not be distracte...

A premium quality, high resistance massage cream that is long lasting, wipes off easily, and leaves ...

Take advantage of our special offer with 50% off single bottles, and even more off 6 and 12 packs. F...

A premium quality, medium resistance massage cream that is long lasting, wipes off easily, and leave...