Randall Cooper
There’s all sort of statistics, systematic reviews and meta analyses in the sports medical literature on how athletes will suffer terrible things following an ACL injury. The media, and many sports medical practitioners feed into a festival of negativity when people injure their knee. You only need to read a few articles on the internet and words like ‘devastating’ and ‘catastrophic’, and phrases such as ‘career ending’ and ‘an athlete’s worst nightmare’ are repeated over and over. Are things really that bad?

Maybe they’re worse! At some point early on in the process practitioners need to have a conversation with their patients that they’re likely to have knee osteoarthritis within 10 years (1), and if they don’t complete their rehab and meet discharge criteria they’ll be 4 times more likely to do another ACL (2), and, if they’re lucky (or unlucky) enough to be under the age of 18 years, then their chance of reinjury is 35% (3)!

It’s no wonder mental toughness and psychological readiness is so important.

Patients should be informed. However, I do wonder whether the stigma of the injury and the combination of people being educated about the high re-injury rates, long-term consequences, lengthy return to sport timeframes, and the popular (mis)conception that it will take ages to regain their sporting form sets them up for one massive psychological battle to regain confidence and sporting performance.

Clare Arden’s well know 2011 systematic review and meta-analysis (4) reported that whilst 90% achieved satisfactory knee function on final return to sport testing (laxity, strength, subjective scales) only 63% had returned to their pre-injury level of participation, and 44% had return to competitive sport at final follow up (mean = 41.5 months).

Why do so many people drop out of competitive sport when their knee is strong and stable?

The interesting thing is that it’s a different story at the elite/professional level.

Let’s take graft and contralateral ACL injury out of the equation for now, and focus on return to pre-injury level of competition and performance.

When reviewing the literature, world-class athletes appear to be able to pick up where they left off – or sometimes better. The most notable of these studies looked into how members of the French Alpine Ski Team returned to competitive skiing and performance following ACL reconstruction (5). The study included 239 male and 238 female skiers who competed on the French national ski team for at least 1 season between 1980 and 2013.

Of the 477 elite skiers in the study, 148 sustained an ACL injury (31%). Believe it or not, the ACL-injured group ended up being more successful (FIS rankings and number of podium finishes) and had longer careers (by roughly 3 years) than the non-ACL injured skiers. In the ACL-group, 55 podiums were achieved before ACL rupture, 176 after.

There’s been similar findings in smaller studies that have investigated return to competition and performance in NFL Quarterbacks (6), and Major League Soccer (7). There were no significant performance differences between case (ACL reconstructed) and control athletes in both studies.

NFL athletes who returned to competition = 92%

MLS athletes who returned to competition = 95%

Authors of a study on NBA players who sustained an ACL injury/reconstruction (8), did report a decline in performance as measured by games per season, minutes, points scored, rebounds per game; and field goal percentage, however as like the studies in football and soccer, there was no difference between groups when compared to age-matched controls.

NBA athletes who returned to competition = 86%

A recent systematic review and meta-analysis (9) included the 4 studies mentioned above, and 20 more, in a paper on return to sport following ACL reconstruction in elite athletes. Other sports included in the review investigated ACL injuries in ice hockey, rugby (union), baseball, and handball.

Pooled data in this review revealed;

Elite athletes who returned to competition = 83%

So, what makes elite athletes different to everyone else?

There’s plenty of factors to consider such as age, athletic skill, levels of fitness, greater financial incentive, access to high quality practitioners, and the ability to devote 100% time and energy in to their rehabilitation. Of course - all those things matter.

However, it’s the psychological profile/aspect that intrigues me the most, and researchers are only just starting to look into this in greater depth. Whilst there’s really no research on psychological profile and its link to a successful return to performance, a recent paper by McPherson et al (10) has shown a correlation between psychological readiness and second ACL injuries.

The study investigated 329 patients who returned to sport following primary ACL reconstruction. Each of the subjects completed the ACL-RSI (psychological readiness score) before surgery and at 12 months post-surgery, and followed up for a minimum of 2 years. Of the 52 subjects (16%) who sustained a 2nd ACL injury there was a trend toward lower ACL-RSI scores compared with non-injured (2nd injury) athletes. Younger athletes (<20) appear particularly vulnerable to 2nd injuries with low ACL-RSI scores.

It may be that what makes an athlete get to the elite level in the first place – dedication, determination, discipline, confidence and what’s known as “grit” (11) is also the main reason they return to sport more successfully.

The take home message – address and work on the psychological as well as the physical.

Pre Event Massage of the Adductors

When it comes to preparing athletes for training and competition with massage, the quads and hamstrings get most of the attention. The adductor group however is just as important and in this video I demonstrate some basic soft tissue techniques to prepare this muscle group for sport and activity.

In the latest instalment of “Mick talks to….”, I sit down and talk shop about hips, specifically the condition femoro-acetabular impingement (FAI) with hip expert, Sports Physiotherapist and Research Fellow Dr Joanne Kemp. For those of you who don’t know Joanne, she has presented extensively...

Improving Thoracic and Cervical Range of Motion with Massage

The cervical and thoracic spine are areas of the body that can become tight and painful, and as a result affect the range of motion and performance of an athlete. Improving muscle tone, range of motion, and pain can be achieved quickly with soft tissue therapy. 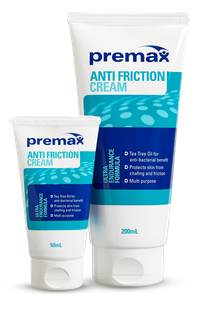 A long lasting, multi-purpose, and high-performance formula used by the world’s best athletes. It reduces the friction and subsequent abrasion of skin to skin or fabric to skin contact. Premax Anti Friction Cream also contains Tea Tree Oil to help protect the skin from harmful bacteria.

A long lasting, multi-purpose, and high-performance formula used by the world’s best athletes. It ...

We understand that triathletes like to focus on their training and performance, and not be distracte...

If you enjoy keeping active outdoors, then our Weather Protection Skincare Pack is your one-stop sol...

A premium quality, medium resistance massage cream that is long lasting, wipes off easily, and leave...

A premium quality, high resistance massage cream that is long lasting, wipes off easily, and leaves ...

A premium quality massage cream suited for massage of sensitive areas and for sports recovery. It ha...

Take advantage of our special offer with 50% off single bottles, and even more off 6 and 12 packs. F...

A premium quality, medium resistance massage cream which is formulated to help prepare people for sp...

Women have different skincare needs to men. We understand. Our Women’s Cycling Pack will help keep...